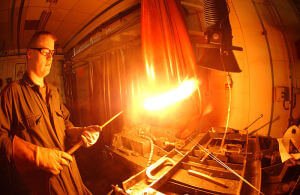 Welding has never had the same draw for young people going into technical careers as say automotive or electrical. But that is changing. America is currently experiencing a welder shortage. This is causing salaries to skyrocket to previously unheard of levels. Due to the oil boom and reemergence of manufacturing jobs in the US, demand for welders has come back stronger than ever.

Welding has fallen out of favor as a career for young people. In 1988, the US had 570,000 welders. In 2012, that number has fallen to 360,000. But due to a recent boom in the domestic manufacturing as well as oil and gas drilling, the demand for welders has increased dramatically. Manufacturing has grown faster than the rest of the US economy in recent years and has caused a large demand for welders.

Also, the average age of a welder in the US is 55 years old. So as the current stock of welders ages out of the work force, the demand discrepancy is only going to increase. Again, pushing salaries up.

To make up for this shortfall, employers have increased pay and perks for welders. Welders employed in the oil and gas business can make salaries in excess of $200,000 a year. Welders who purchase their own truck and rig can work as independent contractors at oil drilling fields and earn up to $7,000 a week. Even welders fresh out of school can expect pay in the $28 an hour range or roughly $60,000 a year. Not a bad starting salary!

If you’re on the fence about welding or looking for a technical trade to learn that will pay off welding is it. Now is the time to begin your training. Opportunities like this don’t knock everyday.